Known for his role in the self written and produced award winning feature film, GOING BONGO, in which he plays an American doctor who mistakenly volunteers to work in Africa, Ernest opens up about the secrets to his success, sense of style, and his next film project. Away from the camera though, he exudes joy and a laid back attitude. Shellina Ebrahim asks the East African movie star,

How did you get started in the film industry?

I don’t really know if I was ever or if I am in the film industry. I’ve had a passion for acting from the age of 3 years. I spent a lot of time alone so I would re-enact my favorite movies and add scenes to them. When I grew up, I worked as a DJ, a TV presenter, and a rapper as well in Tanzania. When I moved to the United States to pursue a degree in Computer Science, I rediscovered my passion for acting and writing. I helped friends produce their stuff, learned a lot online, and from short classes. Then I made Going Bongo.

First movie you ever acted in and/or produced?

Officially, I would say Going Bongo is the first full length feature film that I acted in and produced. All the other stuff I did was for training purposes.

Most memorable film you’ve ever been part of?

I would say this is the film that is the most memorable and I get a feeling it will be for many many years to come.

Name your most influential film inspirations.

I have many. But if I had to choose two, I would and say The Departed (Martin Scorsese) and The Prestige (Christopher Nolan). The acting, the story, the directing is just fantastic in these two films. I can watch them again, and again, and again.

First film you ever bought?

I don’t remember, but I had a full collection of Van Damme movies so it has got to be one of his. Double Impact probably.

I haven’t watched too many current films so this is a really hard one. But I saw Birdman and that was very stunning. Gone Girl was pretty good. Wolf of Wall Street, The first Hunger Games, and Django Unchained were good too.

Which actors and producers would you like to create films with in the future?

I like too many to mention here. I would stick to actors on this one. I like Lupita Nyong’o. Maybe I am biased because she is our neighbor from the north but she is pretty fantastic. Charlize Theron is pretty good. Idris Elba is an actor that I watch a lot. Christian Bale is pretty solid. Then there is Angelina Jolie. An amazing talent. Dustin Hoffman, Denzel Washington, Rachel McAdams, Leonardo DiCaprio. The list is just too long. I have been confused with Terrence Howard a lot. He is great.

What influence and impact do you think Going bongo has had in East Africa and worldwide?

I am not sure that I can grasp the full impact it has had. But it has changed the way people look at East African Cinema. It has changed what producers, directors, and actors aim for when making films. More importantly, it has sparked an imagination of many people in the East African Film industry to go above and beyond and do great work.

What are some of the challenges of making a film in East Africa compared to a place like the U.S.A?

There are lots. But for every challenge there are also opportunities. For example one of the challenges is that the speed of shooting is very slow compared to the USA. However this is compensated because the costs of production are also lower. We don’t have as many skilled personnel as in the USA but we also get to spend longer times with actors to improve their skills.

What advice would you give to aspiring film makers?

I would say make sure you absolutely love every part of it. Not just the glamour. It’s a lot of hard work so you better love it. Additionally, don’t be in the hurry to ‘make it’. It may take a very long time. Be ready for the marathon and enjoy it.

Do you have a pre-acting/producing/writing regimen?

I think sleep is very important. I haven’t had much of it but its important to my regimen. I get lots of ideas when I wake up. But to wake up, I’ve got to sleep. 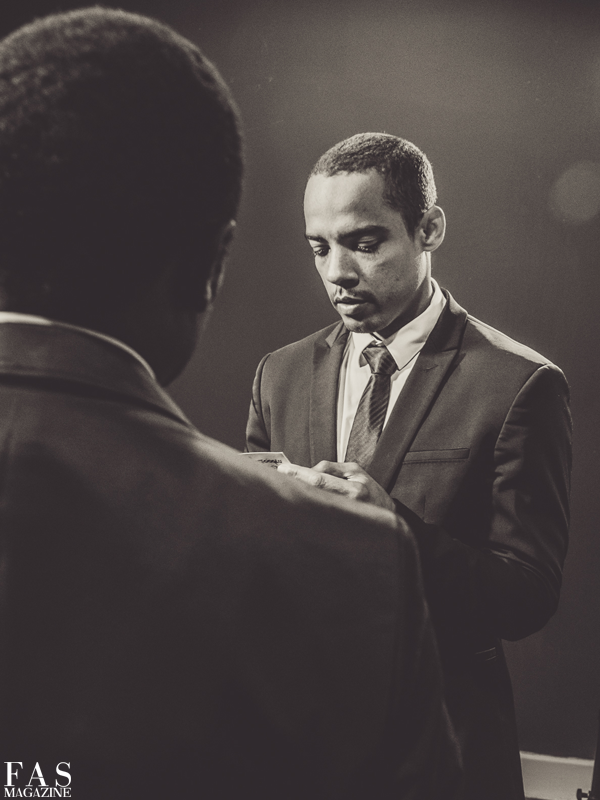 What do you love most about what you do?

Black and white or colour film?

I don’t know. A film with a great story and great acting intrigues me no matter which color it’s on.

Where do you see the East African film industry in the next 5 years? Is there an industry?

There is already an industry. Especially in Tanzania where we have Bongo Movies. To me, an industry means a machine that churns out movies systematically. The Bongo Movie industry produces the largest amount of movies in Africa after Nollywood and maybe South Africa, so it’s definitely an industry. If you are speaking about the quality of movies, then that is something else.

How tough has it been for you to get this far?

I think filmmaking is the toughest job in the world. Apart from all the other skills you have to learn to actually make the film, you have to learn other skills as well. For example, leadership, marketing, public speaking, accounting, law and psychology just to name a few. It’s tough, but its fun. If you enjoy toughness especially.

What would you say it was that has seen you through to this point?

Taking one step at the time and not worrying about the success that may or may not follow. I think that has been very important in the journey of Going Bongo and I now use it in my other parts of life. The mantra is work hard but don’t obsess about the results.

How did the idea of Going Bongo come to you?

I was looking to do a film in East Africa. I stumbled upon an idea that I had as a kid from seeing people from Western Europe and America moving to East Africa and staying. I thought it would make for a great movie exploring that idea. That was the genesis of Going Bongo.

What do you think ultimately gives a man great sense of style?

A woman that can dress him up. Or a stylist. Men are horrible with fashion or style in general. Left on their own, only leads to disasters. Not all men of course. Me and 99% of men.

How East African do you feel at this point?

I am very East African. Though it’s difficult sometimes because East African countries are still not very interconnected. In fact I was recently questioned more on a Kenyan border, than any of my previous trips to Europe or the United States.

Now that you’ve seen how Going Bongo has what’s your next project?

I have a couple of projects. One I am almost done writing is about a football player down on his luck. Another one I shall be producing with other producers about a revolutionary struggle in a famous African country.

What is your most marked characteristic?

I think I am easy going. Many people are very surprised when they meet me. But that’s what stands out. That, and apparently that Barack Obama looks like me.

Who was your favourite film hero as a child?

I used to like all the action heroes like Rambo, Arnold Schwarzenegger, Rocky, Bruce Lee, Jackie Chen and more. In later years, I seemed to enjoy Jean Claude Van Damme. I think the mix of action with human vulnerability that he brought to his characters was pretty stunning.

Who are your heroes in real life?

They are many. Some are dead like Tupac Shakur, Jacques Ellul, Leonardo DaVinci and Napoleon Bonaparte. Some are still alive like Robert Greene, 50 Cent, Dustin Hoffman, and Louis CK.