Home   /   Fashion makes a stride towards women’s rights. A look at East Africa 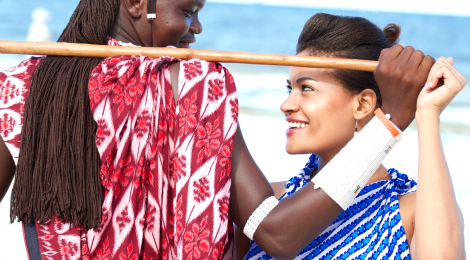 Fashion makes a stride towards women’s rights. A look at East Africa 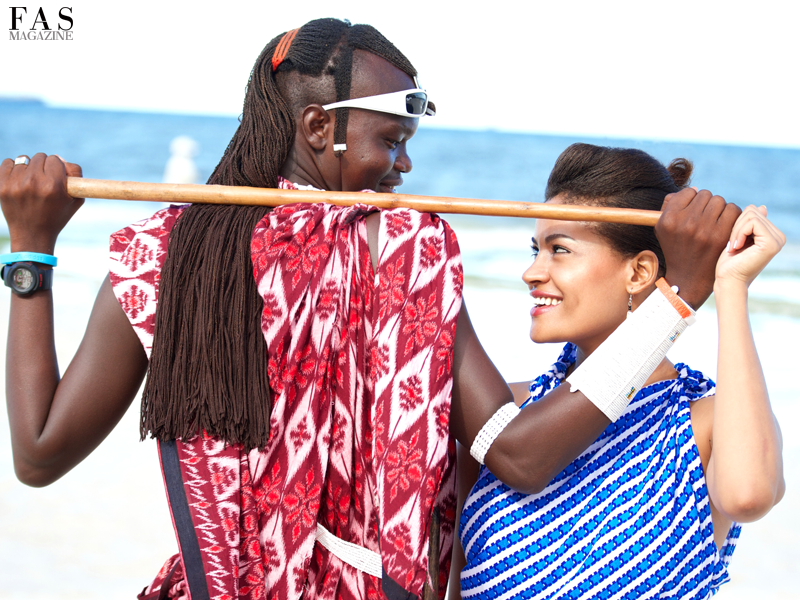 Her clitoris was cut off with a disposable blade when she was 12 years old. Shortly after which she became the fourth wife of a 65 year old Maasai man. She recalls the circumcision experience as dreadful, but ‘a must’ before being accepted into a marriage union. Or even before being recognized by her peers and community as ‘a woman’. Her name is Cecilia. She is 38 years old.Today, she is a vendor in the Kariakoo market in Dar-es-salaam, Tanzania. This is where she has been making and selling jewelry of her culture.

Seated next to her is her son, a Moran (warrior), wrapped in colourful plaid and checkered shukas (fabrics). The same kind of shukas that have been a huge inspiration for fashion designers world wide as of late. There is no denying that ‘the Maasai’ has become a global fashion trend. Until a few years ago, the Maasai was just a symbol of African culture. But a series of models stomped the Louis Vuitton Spring/Summer 2012 runway in a Maasai inspired collection. Land Rover, Diane De Furstenberg, Landrover, Lanvin, Yves Saint Laurent, and Dries Van Notten are just a few brands that have used the ‘Maasai’ name and/or ways of dress in their collections.

A perpetuation of anti-feminism and human right abuses by designers who draw inspiration from a culture that practices female genital mutilation and child marriage? Hardly. On the surface, these brands would be mistaken for hypocrites. Hypocrites for allowing their work to be influenced by a culture that holds women in subservient roles to men. A male dominated society where women are possessions of their husbands and their fathers. A culture where women’s bodies are mutilated for the purpose of satisfying men’s pleasures.

But take a closer look – designers being inspired by the beauty of Maasai culture has globalized the Maasai trend in fashion, as well as shed light on the ugly aspects of this culture. Highlighting aspects of Maasai culture which violate human rights and support gender inequality may create external pressure on the Maasai to gradually practice less of FMG and child marriage. Women’s rights groups and human rights activists continue to educate the Maasai and to apply pressure on governments to enact tougher laws against FMG. In Tanzania, FMG is illegal and has been on the decline, although a very small decline. The Demographic and Health Survey commissioned by the Ministry of Health shows that FGM declined from 18% in 1996 to 15% in 2005.

While FMG has been on a slow decline in Tanzania,  the fact that it is illegal is not enough. FMG is a deep rooted cultural practice that would take more than tough laws and effective enforcement to eradicate. Changing social systems that violate and place women in subservient roles in society is key to ending FMG. Empowering Maasai women economically and educating them on outdated and risky cultural practices could prove to be highly effective in strenghtening human rights and women’s rights in East Africa.

It may appear contradictory and hypocritical for fashion designers to get inspiration from a culture that violates women. Yet, the same inspiration can help to end FMG and child marriage in Maasai society. The globalization of the Maasai in fashion has increased not only demand for products of their kind, but products of their kind made by the Maasai themselves. This type of work had empowered Maasai women economically, making them self sufficient and able to make the world around them better. A woman like Cecilia can testify to this. She says that her business has grown very fast in the last few years.The demand for her products has come mostly from tourists visiting Tanzania and collaborations with local and international companies. In turn, she has been able to  afford school for her youngest daughter, and also to be less dependent on her husband for security. When asked if her youngest daughter will be circumcised she said, “times are changing.”