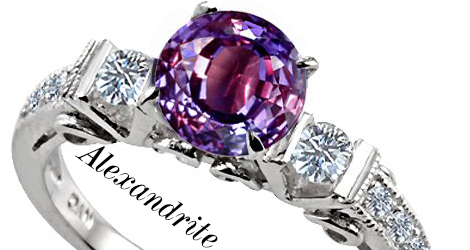 A Chameleon Gem – Rarer Than Diamonds

Many of us know that diamonds and rubies are the most rare gemstones of all although few among us can name some that are rarer. Alexandrite is the most magical and rarer gemstone of all due to its distinctive characteristics and higher value than diamonds, rubies and sapphires. This really does make Tanzania a lucky country because it is one among only a few providing stunning alexandrite to the world.

Since it was first found in 1834 Russia, alexandrite has always been a distinguished gemstone. Upon discovery it was named in honor of the future Tsar Alexander II and became a national gemstone of Tsarist Russia. Surprisingly, this gem displays colours of the old Imperial Russia – blue and green.

Dramatic changes of colour to resemble ruby or emerald is a mysterious ability of alexandrite. Known as the ‘alexandrite effect’, its colour can transform depending on how ambient lighting  is being absorbed or reflected by ions in the crystal structure. This is why alexandrite is referred to as ‘emerald by day and ruby by night’

The uniqueness of alexandrite is not just limited to its chameleon like abilities, but also in how it’s formed. According to science, elements called chrysoberyl and chronium have contrasting characteristics and do not usually occur together. Exceptionally, nature has brought these two elements together and formed alexandrite crystals in very few places such as Sri Lanka, Zimbabwe, Burma, India, Brazil, Madagascar and Tanzania.

While Russian deposits of this mystic gem have dried up, Tanzania  seems  to be producing some of its finest world wide, larger, and in more range of colours. Some of the most outstanding alexandrite have occured at the Tunduru deposits near the Mozambique border  and near the ruby and emerald deposits by Lake Manyara.  Tanzanian alexandrite displays colours from yellowish green or bluish green in daylight and turns brownish red or purple red under incandescent light.

Alexandrite commands a higher value than most precious gemstones due to its rarity, durability and distinctive historical significance. It’s a great addition to any gemstone collection but care must be taken not to pay for alexandrite when you are not getting an authentic one.